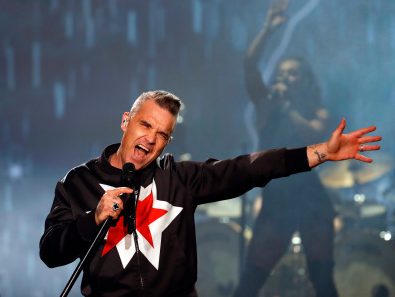 Posted at 13:00h in Deadline by Andreas Wiseman by Embankment Films 0 Comments
0 Likes

EXCLUSIVE: Robbie Williams and regular song-writing collaborator Guy Chambers, known for their partnership on hit singles including Angels, Let Me Entertain You and Millenium, are to provide an original song for UK comedy-drama Military Wives, starring Kristin Scott Thomas and Catastrophe‘s Sharon Horgan.

Peter Cattaneo’s (The Full Monty) upcoming film, inspired by the hit BBC documentary series, The Choir: Military Wives, tells the story of a group of women, separated from their loved ones serving in the armed forces, who form a choir at their army base. Pic is currently in post-production.

Bringing aboard Williams, the best-selling British solo artist ever in the UK, is quite a coup for the production. I gather the singer was approached by producers via music supervisor Liz Gallacher and he quickly sparked to the material. It’s not clear at this stage whether Williams will also sing the song.

Williams first started working with Chambers in 1996 when they co-wrote some of the singer’s biggest hits. Following a decade of not working together from 2002 to 2012, the pair reunited to work together on the former Take That star’s two most recent studio albums Swings Both Ways and The Heavy Entertainment Show, both of which went to number one in the UK. In total, ten of Williams’ 11 albums have gone to number one in the UK charts.

Embankment is handling international sales and showing first footage of the film at the EFM in Berlin. The company is co-repping U.S. with CAA. Ingenious was lead financier. Lionsgate pre-bought UK rights.

Co-written by Rachel Tunnard (Adult Life Skills) and Rosanne Flynn (Crossbones), pic is produced by Rory Aitken and Ben Pugh of London and LA-based 42 and Piers Tempest for Tempo Productions. René Besson is executive producing alongside Erica Steinberg and Josh Varney for 42 and Emma Willis and Hana Carter for Twenty Twenty TV.

Williams and Chambers commented, “It’s always a joy to work together on new music, and we’re thrilled that
our new song will be featured in this special film. We’re really proud of the track and can’t wait for you
all to hear it.”

The producers said, “Over the last few months, Kristin, Sharon and our hugely talented ensemble cast have put their hearts and voices into telling this tale, which demonstrates how a community of strong women can come together and literally change lives. Having Robbie and Guy collaborate with us on the original music, which is so essential to the journey of these characters, is truly exciting.”