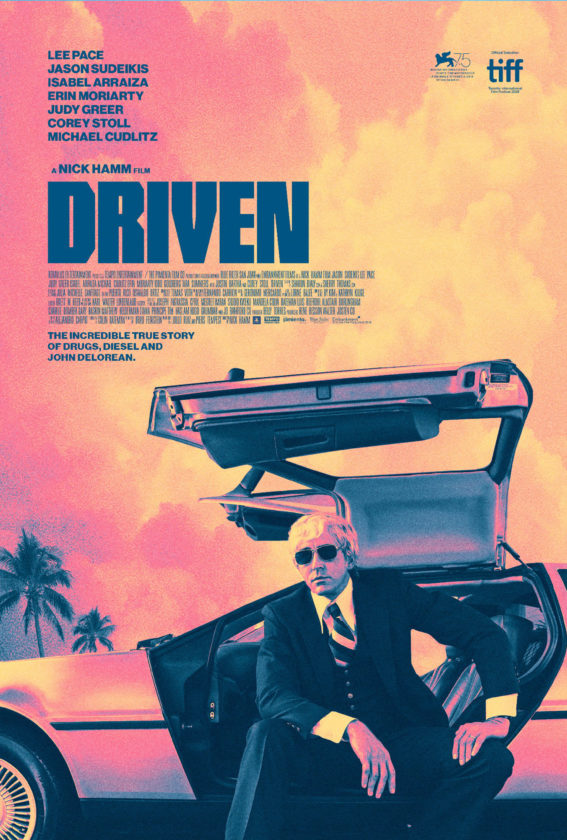 “You want the FBI to lend John DeLorean two million dollars so that he can buy the cocaine we’re gonna arrest him with? Are you out of your fucking mind?”

California ‘77: playground of the rich and famous, sun-soaked, sex-crazed and powered by shitloads of Colombian snow.

Leading the parade: maverick auto-designer John DeLorean (Lee Pace), high-risk gambler and corporate vampire. Blinded by ambition, even if that means selling his soul, DeLorean will stop at nothing to design the ultimate car of the future, a sports car with wings.

On the outside looking in: DeLorean’s neighbour Jim Hoffman (Jason Sudekis), barely supporting his family while living high-end on the pay of a low-end bullshit artist. Enticed into DeLorean’s inner circle, Jim soon discovers the playboy entrepreneur’s life is on the brink of collapse.

When busted by the feds with a planeload of drugs, Jim’s turned snitch by Special Agent Benedict Tisa (Timothy Olyphant). His ultimatum: deliver the head of John DeLorean.

The true-life sting operation and lurid celebrity scandal, Driven is a turbo-charged tale of ambition, entrapment and betrayal.