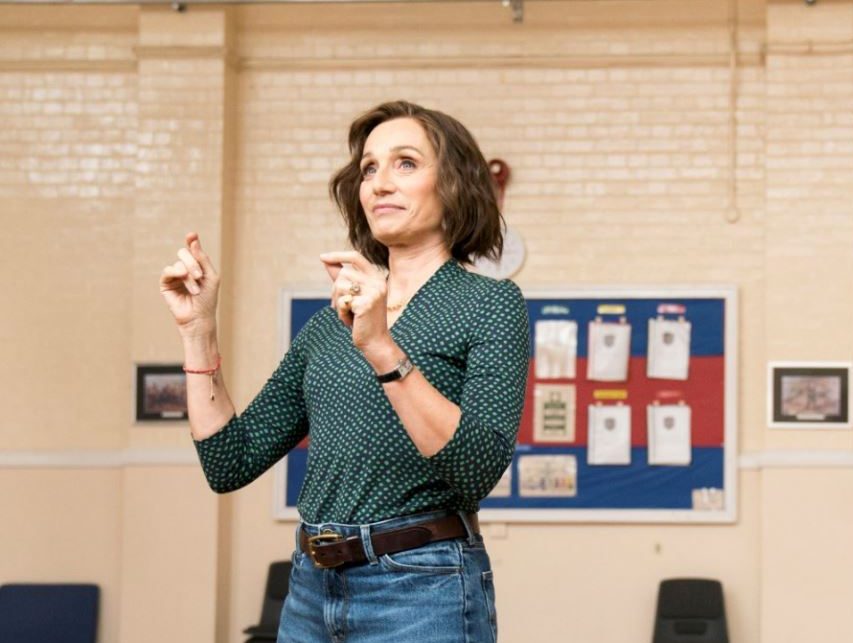 Posted at 12:53h in The Hollywood Reporter by Leslie Felperin by Embankment Films 0 Comments
0 Likes

Kristin Scott Thomas and Sharon Horgan star as British women who form a choir while their soldier spouses are away at war in the latest from director Peter Cattaneo (‘The Full Monty’).

Director Peter Cattaneo seems to have been on a prolonged career hiatus ever since his last three features (Lucky Break, Opal Dream and The Rocker) failed to even vaguely approximate the astonishing return on investment that distinguished his 1997 breakout sleeper hit The Full Monty. However, Cattaneo’s latest, the eminently entertaining Military Wives, has every chance — just like in any Hollywood rise-fall-rise-again movie — of resurrecting the British director’s stock again.

At the very least, it forms a pleasing companion piece to Monty by again deploying an eclectic, likeably normal-looking ensemble (nearly all women this time instead of men) to tell a story about a relatively unsung group of amateurs (this time the spouses of armed forces personnel instead of Monty‘s unemployed steel workers) who build self-esteem through performance (choral singing instead of stripping). Sure, it shamelessly panders to our collective sense of duty to support the troops — and, of course, also support the families that support the troops — and maybe it’s more than a little manipulative and formulaic. But gosh darn it, it’s hard not to warm to a film that features an a cappella version of Yazoo’s “Only You,” a near-derelict car that may or may not be called Shite Rider and Kristin Scott Thomas having a verbal cat fight in a parking lot.

By some distance the biggest name in the cast, Scott Thomas seems to be enjoying herself here as a poshly accented, cashmere-clad queen bee who is married to the ranking officer (Greg Wise) at a fictional army base (as opposed to all those roles where she played a poshly accented, cashmere-clad lady with other sorts of spouses living in other locales.) Given the way that the social hierarchy on the base mirrors that of the soldiers themselves, Scott Thomas’ Kate is supposed to be a little apart from everyone else but still in a kind of service to the base, making sure everything is ticking over as it should, part chatelaine, part PTA president.

According to these unwritten rules, it’s the job of the partner of whoever is the troop’s current staff sergeant to organize regular communal activities to keep morale up when the spouses are on deployment. Therefore, when most of the base’s soldiers are sent to Afghanistan for a tour, this role falls on the shoulders of down-to-earth Irishwoman Lisa (Sharon Horgan), who runs the on-base convenience store and is currently struggling to bring up her and husband’s smart but mouthy teenage daughter Frankie (India Ria Amarteifio, making an impression).

However, having not long ago done the job herself, and without much to do these days apart from keep the house spotless and try not to dwell on her grief over the death of her son, a soldier killed in combat, Kate can’t resist meddling in Lisa’s efforts to organize new activities for this tour of duty. During one of the coffee mornings hosted by Lisa, Kate pressgangs Lisa into writing down the suggestions on a whiteboard of other things the wives can do.

When recently arrived newlywed Sarah (Amy James-Kelly) suggests forming a choir, natural show-off Kate is thrilled but knows she won’t get the other women to take part unless Lisa, a much better-liked person among the spouse crowd, is nominally the leader. Lisa is hesitant at first, but given that her own mother taught music and hints are dropped that she may have been in a band herself at one point, she gets into the idea as long as they sing pop songs and not the classical pieces and hymns Kate is keen on.

Structurally, the script credited to Rachel Tunnard and Rosanne Flynne efficiently deploys every trope in the arsenal of zero-to-hero storytelling, including the revelation that one of the gang, Jess (Gaby French), has an impressive natural talent. (“Of course, it would be the Welsh one,” snarks one woman, a knowing nod to the stereotypical image of Welsh people as tremendous vocalists.)

As if guided by an algorithm, the script maneuvers Kate and Lisa into a growing friendship cemented on a confidence about the death of Kate’s son, all the better to engineer a dramatic rift between them that can be healed in the final minutes. Indeed, the narrative keeps placing patently artificial roadblocks in the way of the women’s ultimate goal of performing at London’s Royal Albert Hall for a charity Remembrance Day concert, just so that the final triumphant achievement of their goal will feel all the sweeter before the obligatory montage of the real world counterparts who inspired the story. Equally predictable, but more justified given the context, is the inevitable moment they’ve all been dreading when one of the women receives the horrible news that her husband has been killed in combat.

As it happens, it’s a sequence handled with considerable sensitivity, generating suspense over who the widow will be in a way that underscores the random cruelty of war. The reaction of the bereaved wife (it seems unfair to the actor not to say who it is, but it would spoil the moment) is beautifully performed, a study in shock long prepared for. Her performance develops even more

nuance when Scott Thomas’ Kate comes over to comfort her, prompting a gloriously layered display of conflicting emotions from Kate, including empathy, hesitancy to show that empathy in case it triggers her own grief, practicality and warmth — all buttressed with smartly written dialogue that rings true to how women like this might sound.

It’s those little flickers of authenticity throughout that really kick the movie up a notch, discoverable in subtle moments like when rivals Kate and Lisa trade polite passive-aggressive barbs, always punctuated with grimacing smiles of insincerity. Horgan proves to be a more the capable sparring partner to Scott Thomas, but in fact the ensemble is packed with sparky little turns from the supporting players, such as seasoned character actor Laura Checkley, funny as all get out as soccer-mad Cockney Maz; Emma Lowndes (from Downton Abbey) as an unsentimental straight shooter; and scene-stealing Lara Rossi as a lesbian hairdresser who seems to be almost clinically tone deaf.