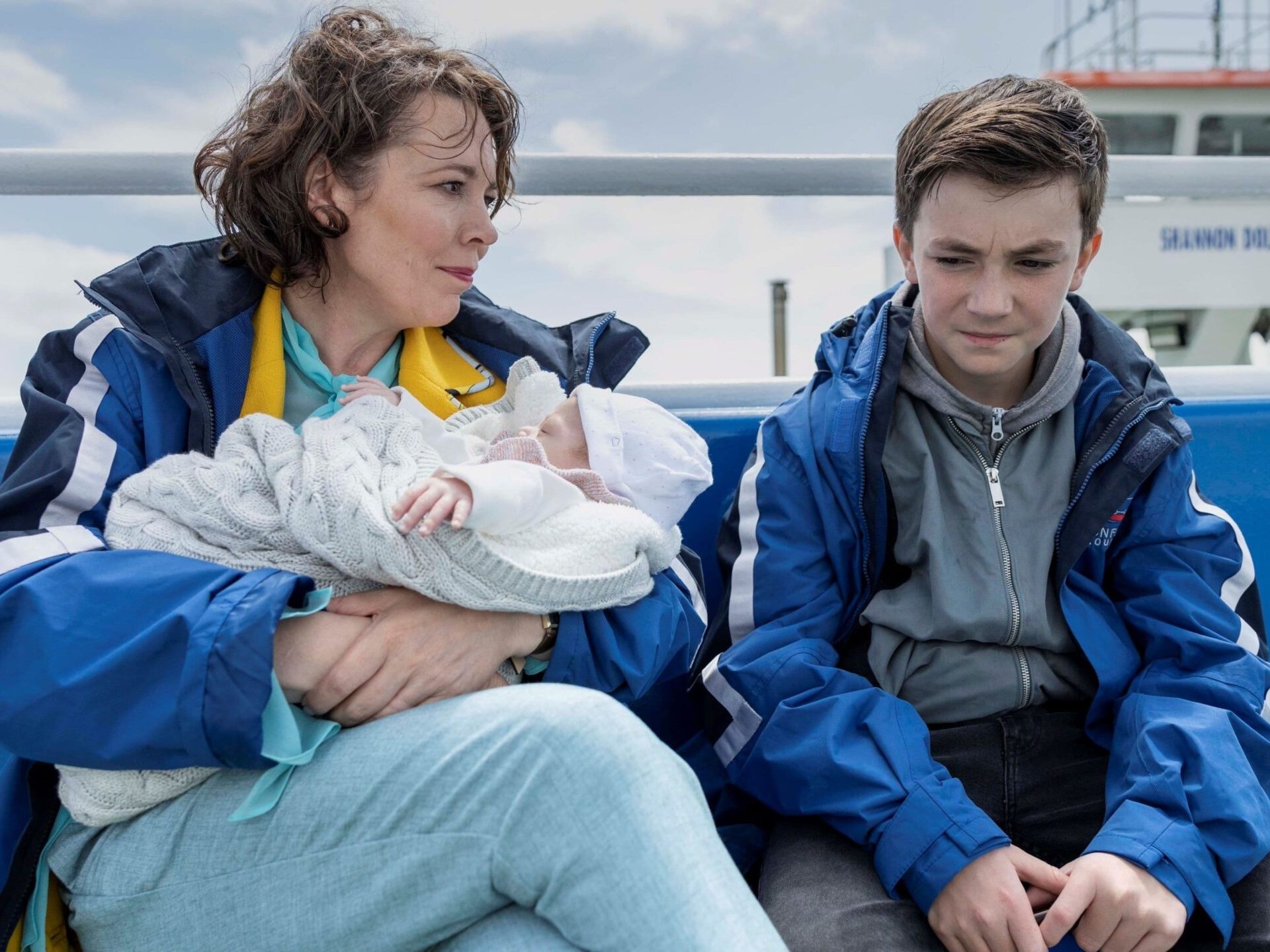 Posted at 12:13h in The Times by Kevin Maher by Embankment Films 0 Comments
0 Likes

She wowed in Broadchurch. She was The Queen in The Crown. She won an Oscar for The Favourite. And she’s also snagged a Bafta, an Emmy and three Golden Globes. Is there anything that Olivia Colman cannot do? Well, a passable Irish accent certainly seems to be beyond her skillset, based on the ear-scraping concatenation she delivers here, one that begins with a bit of flat vowel Dublin, pings to sing-songy Cork, then harsh Belfast before finally settling on Hollywood’s Glocca Morra (from Finian’s Rainbow) with some alarming Oirishisms — “Oh moy Chroist!” she exclaims loudly, midway through. “Oi really am mental!”

And yet, Colman, typically, in her first lead movie role since last year’s The Lost Daughter, is so strong that it mostly doesn’t matter. She plays Joy, a hard-drinking lawyer and so-called “geriatric mother” who became unexpectedly pregnant, for the first time, at 48 (“I didn’t think it could happen!”). As the movie opens, Joy is caught in a postpartum whirl and plans to give up her newborn for adoption and then flee to Lanzarote towards a new, hedonistic and baby-free future. Enter smart-mouthed 13-year-old runaway, Mully (Charlie Reid), with a stolen taxi and a preternatural gift for calming colicky infants, and the stage is set for a zany road trip across the county of Kerry in a film that is far less frothy than it initially appears.

Documentary filmmaker Emer Reynolds (Here Was Cuba), making her feature debut here, constructs a Trojan horse yarn that duly hits all those familiar Irish road movie beats in the first half (think of Leap Year or Perrier’s Bounty or even the recent Pixie). Thus Joy and Mully initially clash then slowly bond while encountering a wacky bestiary of rural eccentrics including a travelling folk singer (David Pearse) and an aphorism-spouting ferry operator (Tommy Tiernan). But as the movie rolls jauntily along, Joy’s character is complicated by flashbacks and biographical trauma, and the screenplay by Kerry native Ailbhe Keogan (she wrote the equally affecting Run & Jump) begins to poke at deeply unsettling ideas.

Joy, for instance, is seemingly repulsed by her own baby (named Robin, on a whim) and must be instructed in the ways of breastfeeding, in two separate sequences, by the young male whippersnapper Mully. A movie that depicts a middle-aged woman being “boysplained” the let-down reflex will possibly raise the hackles among certain sections of the sisterhood, but the context is everything, and it is one (without drifting into spoilers) of hovering infanticide.

Like The Lost Daughter, Joyride is a film about the legacy of bad mothers and the ambiguous rewards and punishments of parenting. But it’s influenced too by history and culture. Kerry, in 1984, was the site of one of the most infamous child murder cases in Irish history. Known as “The Kerry Babies case” it revealed a hitherto hidden reality of unwanted pregnancies, silenced women and murdered children, and it for ever scarred the national psyche, as if the flipside of “the Guinness and the craic” was rampant infanticide and the denial of women’s reproductive rights.

That’s all there in Joyride, in Joy’s backstory and in often seemingly throwaway lines of dialogue. An embittered local stares at Joy and sneers, “That woman should’ve taken the ferry five months ago!” She means, obviously, the ferry to the UK for an abortion. Elsewhere an apparent compliment about Joy’s social vivacity (“Everyone loves Joy!”) is revealed to be a derisive slur concerning Joy’s apparently chaotic private life (the identity of the baby’s father is up for grabs).

Colman plays the weight in these scenes perfectly. She is an extraordinary talent who is always prepared to inject her characterisations with crucial blasts of vanity-free derangement. She’s exciting to watch because she’s dangerous and because she’s not afraid to appear unlikeable (an instructive comparison is Emma Thompson, who can play all scenes at all levels, as long as her character is fundamentally appealing). But it’s in that apparent unlikeability that Colman finds the honesty and, ultimately, the sympathy. And she does so here, consistently, even as Joy repeatedly does the wrong thing.

Yes, the climax is perhaps over-stated (someone needs to be, very literally, “saved”), and the closing frames are syrupy, with a needless laughter track. But that’s what the genre demands. It’s a wacky, lark-filled road movie that’s “feelgood” to its core. Until it’s not.