Glenn Close Paints Her Masterpiece With The Wife 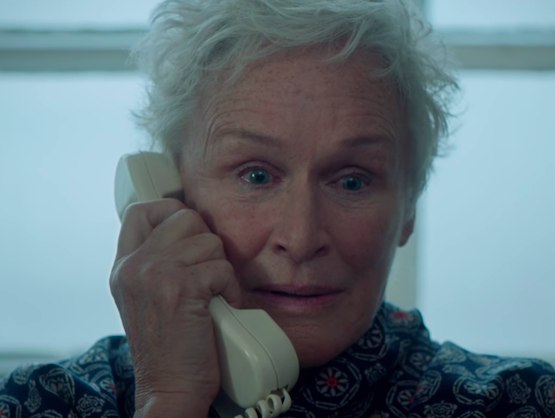 22 Aug Glenn Close Paints Her Masterpiece With The Wife

It’s been said that though women are capable of writing the Great American Novel, the writers who achieve the kind of iconic status of literary gods are always men. That’s because myths can be built around them. This is also true, by the way, about male directors. If you’ll notice, women are encouraged to be producers but few women filmmakers achieve the same kind of status as their male counterparts. We all know this is true, even if there are near exceptions here or there, and there are.

If you have the stomach for it, you can fight against the way things are, you can push hard for equal recognition and to be revered like men are, however futile it may turn out to be. Women are beloved and appreciated as wives and mothers, girlfriends, cheerleaders standing behind their men and propping them up. Men love to be praised by women but they don’t like as much to praise women, or to have to admit that a woman is better than they could ever hope to be. This is mostly true across the board, except for the rare professions that allow for women to rise, like singing.

A singular creative vision, however, is almost always trusted more in the hands of men than women. Knowing that helps one to navigate through the complex nature of the Wolitzer novel and the Björn Runge film, The Wife.

To discuss this story in much detail would necessitate a massive spoiler which also happens to be what the whole thing is about. That makes it hard to talk about without giving the game away. But what you should know without knowing the spoiler is that this is a meditative film on the life of one woman who made choices that she can either live with by the end of the film or she can’t. Watching all of this simmer beneath the fine exterior of Glenn Close, who is by now an American treasure, is nothing short of exceptional. Only a truly gifted actress could pull off such a feat and indeed, it is made even richer by Close’s own background, her own experience, and the versatility with which she comes at her talent and skill.

I have been watching Glenn Close for nearly all of my adult life, and when I think back on each of her characters — I see completely different people. The obsessed lover in Fatal Attraction, the weary authority on love who loses the upper hand in Dangerous Liaisons, the tightly wound attorney in Jagged Edge, the earth mother hiding a secret in The Big Chill, the muse in The Natural, funny Jenny Fields in The World According to Garp. And lest we forget, my own personal favorite performance of hers, the magnificent Sunny Von Bulow in Reversal of Fortune, which was released just a few years after Fatal Attraction. Now think about that transition, think about how different those two performances are and you will start to scratch at the surface of what makes Close such a fine artist, one of the best of her generation.

And worse, we watch younger actresses waltz in, capture the hearts of voters in a single season and walk away with a trophy. Sometimes you wonder, what are we all doing here? What kind of prizes are we giving out?

Okay, back to The Wife – but be warned: [spoilers]

The Wife is about a brilliant young writer who happens to be female and who marries her college English professor, himself with aspirations to “be a great American writer.” She knows she can never be that. She is a cashmere sweater-wearing, shy young woman. Why in the world does anyone care what she thinks about anything? So it falls to her husband, Joe (Jonathan Pryce), to become the famous writer while she decides instead to simply rewrite his work, to make it better, to turn him into the star and watch from the sidelines.

On the outside, and to the world, they are Joan and Joe Castleman, she the long suffering wife who bore him children and kept the household running smoothly and he the brilliant writer on the level of a J.D. Salinger. That is the image they traded for the truth because the truth was something the world at that time, and even now, wasn’t ready for. What is the truth? That the wife, not the husband, is the genius writer of the two.

The film is a suspense story as a writer (Christian Slater) starts to track down the truth. And as he does so, we watch Joan’s facade begin to crumble. She asks Joe one favor: don’t thank her in his speech when he wins the Nobel Prize. She doesn’t want to hear the words come out of his mouth, his “thanking” her for her “help” when in fact, she is the one who wrote the books.

But of course, he must thank her because the world is watching and that is what husbands do when they at last take to the stage to accept their high honor. That turns out to be her breaking point. It wasn’t the many affairs he enjoyed throughout their marriage. It wasn’t staying silent. It was that she asked one thing of him — one thing — and he could not give her even that.

The film has a cavernous loneliness to it that the book doesn’t seem to, mainly because in the book we have a greater understanding of why the wife would go to such lengths. It was a gradual and not a sudden thing: bit by bit, page by page, until eventually Joe just gave over all of the writing to her. Each time his books did well, Joan could silently cheer, knowing she outed them all as sexist hypocrites. No, had they known SHE wrote them, they likely would not have celebrated them. They needed the man. They needed the god. They needed the myth of the brooding American male writer.

Just for the fun of it (or rather the horror of it), I often imagine great works of literature or film springing from the minds of women and not men and what people would think of them if they were. If Titanic had been directed by a woman, would people conclude it was far too “emotional” and “sloppy” to ever achieve greatness? What if The Catcher and the Rye had been written not by Salinger but by a young woman? What then? Does she become the same kind of hero Salinger does? I suspect that once people know they’re looking through the lens of a woman their entire perception changes.

What if while you were reading this you imagined that a man had written it. Would you think it better? Worse? We can’t really alter our own biases but we can be aware of them. I suspect this one is a bit baked in to a culture that has, for hundreds and hundreds of years, built monuments of worship in the name of men.

The Wife is one of the best films of the year, but more importantly Glenn Close’s performance is not only one of the best of this year by any actor — male or female — but certainly a high water mark in a 40-year career that contains multitudes.