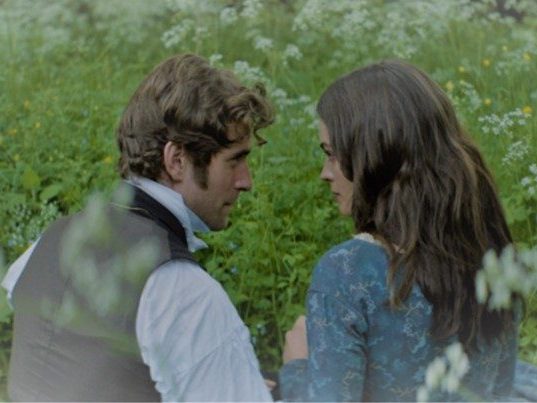 Posted at 07:41h in Variety by Jessica Kiang by Embankment Films 0 Comments
0 Likes

The ‘Wuthering Heights’ author is warmly embraced and gently released by actor-turned-filmmaker O’Connor, in a period drama with a subtly modern sensibility.

There are no flirtations with the fourth wall in Frances O’Connor’s “Emily.” There is no synthpop on the soundtrack. No one ranks the relative attractiveness of the Brontë sisters on a scale out of 10, or attempts, bustle be damned, to twerk. Yet despite lacking all markers of the recent trend for girlbossified costume drama, the directorial debut from O’Connor — an actor who is no stranger to corsetry herself after “Mansfield Park” and “The Importance of Being Earnest” — gives us a strikingly current take on the Brontë behind “Wuthering Heights.” Unlike many a literary biopic, it feels anything but pagebound. If “Emily” were a book, however, it would be a fresh reissue of a Penguin Classic, with its timeless orange cover unobtrusively updated to be crisp and covetable all over again.

In attentively reimagining Emily Brontë as a new woman unluckily born into old days, O’Connor’s chief ally is her star, Emma Mackey. At first, Mackey’s modernity seems almost like miscasting, and not just because the actress is most familiar from Netflix’s self-consciously au courant “Sex Education.” Her gaze seems too direct, her jaw too firmly set to sit easily in the demure environs of rigidly respectable 1840s country life.

But that quickly becomes the point, with Mackey able to convey simultaneously that this is all the world her character has ever known, that she loves it deeply, and that she is entirely bewildered by it. Most of her interactions are clouded by incomprehension at why things that are so clear to her should seem so peculiar to everyone else. In a fit of frustration at her unworldiness, Emma’s elder sister Charlotte (Alexandra Dowling, by turns sweet and severe, like a peppered strawberry) tells her that she is called “the strange one” in the village. Being ahead of your time, while you’re still living through it, looks a lot like simply being out of your time.

Emily even faints wrong, as she does in the opening flashforward, not swooning delicately but crumpling under her own weight, needing to be shuffled to a couch by Charlotte and Anne (Amelia Gething), the youngest, peacemaker sibling. While Anne rushes to find their father (Adrian Dunbar), an unyielding but not unkind local rector, Charlotte tries to prise the secret inspiration behind Emily’s “base, ugly” novel from her. “Why is it so hard for you to believe that your sister might have written something of merit?” Emily whispers. And so O’Connor, working from her own unflowery screenplay, slyly acknowledges the paradox of a film that wants us to believe Emily Brontë had a vivid enough interior life to have wholly invented “Wuthering Heights” — but also that, in some part, she lived it.

Because “Emily,” as well as illuminating Brontë’s close, conspiratorial relationship with her wastrel brother Branwell (“Dunkirk’s” Fionn Whitehead), details an ahistorical, torrid romance between the author and her father’s curate, William Weightman (Oliver Jackson-Cohen). (The real Weightman was romantically linked to Anne, not Emily, meaning poor old Anne gets short shrift once again compared to her more famous sisters.) Weightman’s first sermon, in which he talks in sensual Byronic language about loving the wildness of the area and of God being “in the rain,” is amusingly implied to set the loins of the lady congregants a-quiver. But not Emily’s. Observing Charlotte’s attraction to the man, Emily warns her that he is not to be trusted. But when Charlotte leaves for a teaching position — at a school that also briefly employs Emily before she is sent home again, overwhelmed — Emily and Weightman grow closer, over French lessons that turn into spirited, unsubtitled French-language sparring sessions.

Of course their fling, portrayed with surprising sexiness, cannot last. And Branwell’s decline into alcoholism and drug use, coupled with Charlotte’s increasing embrace of the primly respectable real world over the liberated imaginary kingdoms the siblings created as children, causes Emily pain. As well as a doomed romance, the film is also a singularly moving investigation into the mechanisms of sibling relationships that are forged in soulmate-style love, but tinged with rivalry and spite.

DP Nanu Segal’s photography is pretty but not prettified, and integral to the contemporary vibe. The subtle shake of the elegant, handheld camerawork becomes more pronounced outdoors, as though caught in the blustery dampness of the moors outside Haworth parsonage, the Brontë residence. Inside, the camera, dim with cloud-filtered daylight, settles pensively into rooms scuffed and unfussy, without a hint of chintz, sometimes pulling a trio of faces into a circle of candlelight out of a pure black background. Set to Abel Korzeniowski’s exceptional score, which is tempestuous and classical but frays at the edges into scraping violins, the filmmaking at times borders on the expressionistic, without ever betraying the traditional period form.

Brontë purists may quibble with the futzing of the timeline. Here, Branwell dies just before Emily writes her legendary book, not after; the unmentioned “Jane Eyre” is implied to have come later again, when in fact it was the first Brontë novel to be published; and Anne never so much as picks up a quill. But O’Connor’s well-modulated debut doesn’t pretend to be a faithful recreation of the facts of the Brontës’ lives. Instead it succeeds on a much trickier level, giving us a psychologically vivid Emily who did not write “Wuthering Heights” because a real-life romance unlocked her passionate nature, but whom we’d love to imagine having had such a grand affair, because she was always the woman with “Wuthering Heights” inside her.