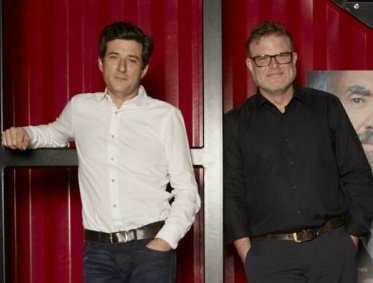 Posted at 12:13h in The Hollywood Reporter by Alex Ritman by Embankment Films 0 Comments
0 Likes

“One of the most important things that Hugo and I keep reminding ourselves is that we perform best when we’re happy. And we’re very happy,” says Haslam, right, who was photographed with Grumbar at the duo’s London office on Jan. 22.Hugo Grumbar and Tim Haslam of the London-based sales banner discuss moving into producing, seeing independent financing matrixes in their heads and how they’ve been pushing for female-focused content long before the current climate.

Founded in 2012 by finance vet Tim Haslam and long-time distribution exec Hugo Grumbar, U.K.-based sales banner Embankment charged out of the blocks with its first title, the Naomi Watts-starring Princess of Wales biopic Diana. Seven years and 29 films on, the company — owned entirely by its seven-strong exec team alongside a board that includes industry stalwarts Terry Back and Peter Sussman — has landed its first Oscar nomination thanks to Glenn Close in The Wife. Working as a self-declared “convertor” of IP — be it an idea, storyline, one-pager or fully-drafted script — and one that now exec produces the vast majority of its slate, Embankment’s upcoming list of titles includes the Kristin Scott Thomas-starring Military Wives, Alexandra Daddario’s Can You Keep A Secret and the Judi Dench-fronted spy drama Red Joan, not to mention the Sundance-bowing Weinstein doc Untouchable from the team behind Man on Wire. Speaking to The Hollywood Reporter from their proudly one-roomed office near London’s famed Notting Hill area (just hours after hearing that Close had been nominated for best actress), Haslam and Grumbar discuss the possibilities to diversify Embankment’s activity, seeing independent financing matrixes in their heads, and how they’ve been pushing for female-focused content long before the MeToo era.

How did The Wife come to be with Embankment, and just how crucial were you to making the film happen?

HASLAM Rosalie Swedlin, the main producer, had been developing the screenplay with [writer] Jane Anderson for about seven-eight years. About three years ago she sent us the script and we responded really fast to it. It already had Glenn attached — she’d stuck with it for many, many years. Before we started pre-selling it, the film was supposed to have been significantly financed out of Scandinavia, but we realized that some of the financing wasn’t going to be forthcoming. So we brought in Piers Tempest as a British producer and we configured the budget, reduced it by £1 million [$1.3 million], and relocated it from Oslo, Stockholm and Copenhagen to Scotland. And with that were able to bring in [financiers] Silver Reel. Piers and ourselves did that in super quick time.

If The Wife is a classic Embankment title, how would you describe your output?

GRUMBAR I think if someone thought of us as a brand, they would think of us as delivering quality films for identifiable audiences. It just happens that the last half a dozen films are speaking to a similar female audience. The reason for that is the space in which we operate. We also want to appeal to an audience that recommends [movies to friends], and those have always been women.

You seem to have been involved in female-focused films long before the MeToo movement. Is it pleasing to see others now following suit?

HASLAM I think it’s always been in our instinct. It’s also an economic concern, because they’re a strong audience for us. We can’t compete on explosions. It’s gratifying and really exciting. I think everyone is using this word ‘voice’ now and these are strong voices.

Has moving into financing and exec producing been an important step?

GRUMBAR It’s something that filmmakers have recognized is needed in the independent space in its current climate. It’s surprising how many times you meet filmmakers who haven’t actually strategically gone through the process of targeting an audience. And so we just aid in that process with our market knowledge.

HASLAM As soon as we read the material we see a matrix in our heads of independent financing, and that matrix is different every time. But it’s an instinct. And we see it pretty much immediately.

In this age of mergers and acquisitions, with Endeavour buying Bloom, for example, has anyone come to kick the tires of Embankment?

HASLAM I couldn’t possibly say. But we do own the company 100%, which is unusual — us, the staff and the board. We have a decision now because we are very healthy fiscally, and we have a decision whether we maintain that and keep going, which I’m very happy to do, or we scale the company. And scaling means not necessarily the typical world of increasing activity it may mean diversifying our activity.

HASLAM Absolutely. If you look at FilmNation, they’re absolutely brilliant. I’ve always watched what Glen [Basner]’s done and think it’s brilliant. I’d like to have the same pioneering attitude.

And still in the same room?

HASLAM For sure. Or everyone can work from home. That’s even better.