Lost in the Dark: How Horror Movies Are Hiding the Best Performances of 2016 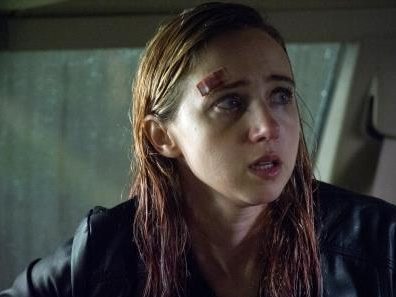 27 Oct Lost in the Dark: How Horror Movies Are Hiding the Best Performances of 2016

Zoe Kazan in “The Monster” is one of many scary brilliant 2016 performances that deserve a closer look.

It shouldn’t come as a surprise that “The Monster” boasts (at least) one of the year’s best performances, but it does. In fact, that revelation arrives with as much of a jolt as any of the film’s immaculately-timed jump scares, which writer-director Bryan Bertino (“The Strangers”) unleashes with the discretion of a master and the patience of a monk. Like any great twist, it hides in plain sight from the start, and like any great twist, it reveals itself with maximum impact, delivering the chilly kind of shudder that doesn’t shake off with the closing credits.

Zoe Kazan plays Kathy, a ferocious alcoholic who looks at her bright young daughter as though the little girl were nothing but a symptom of the particularly stubborn hangover that she’s been trying to shake for the better part of a decade. Less of a mother to Lizzy (Ella Ballentine) than Lizzy is to her, Kathy sees the kid as nothing more than a high-maintenance hurdle between herself and her next drink. No longer able to contain the rage she’s been bottling up since Lizzy was born, Kathy decides to permanently relocate her daughter to her dad’s place. Worst. Road trip. Ever.

But of all the wrong turns that Kathy has made as a mom, none will prove to be more dangerous than the one that steers she and her daughter down a remote stretch of country road and straight into the feeding ground of a drooling woodland demon (that’s what you get for not using Waze).

Viewers will get hip to the greatness of Kazan’s performance at their own pace — in a crowded theater, you might even be able to feel that moment of recognition crackle across the crowd, a chain reaction of giddy little aneurysms. For me, it happened during a heartbreaking moment of hope towards the end, when she’s raw and undone and jackhammering into the bedrock of bruised love that she’s been paving over for nearly 90 minutes.

But even those of us who have long since appreciated Kazan as one of the smartest and most acutely sensitive actresses of her generation may not see it coming. It’s not because the part is such a far cry from the more effervescent women she’s so memorably inhabited in the likes of “Ruby Sparks” and “Olive Kitteridge,” or because Bertino’s first feature in eight years is being released with precious little fanfare. No, the shock of Kazan’s achingly graceful performance is that she delivers it while fighting against a rubber hell beast with cloudy eyes and oil slick flesh.

There’s always something vaguely surprising about seeing great performances in a horror movie, which is strange because we so consistently get to see great performances in horror movies. In fact, the genre has been responsible for a significant portion of the year’s most indelible turns, particularly by women. Perhaps that’s an inevitable reflection of life in the year 2016, when abject terror is the most believable of all emotions, but there’s no denying the volume or impact of these performances, just as there’s no denying that the film world has a long history of conditioning audiences to believe that such performances are somehow ineligible for wider recognition.

Industry awards may not be known for their perspective or perceptiveness, but it’s still telling that no one has earned an Oscar nomination for acting in a horror movie since the last time a Clinton was about to become President. And no, “Black Swan” doesn’t count (but “The Silence of the Lambs” does).

The ghettoization of horror is old news (though the topic seems to stick a bloody hand out of the grave every October, like the undead equivalent of evergreen content), and the film industry has so internalized its prejudice against the genre that resistance can feel a bit futile. That bias has inevitably trickled down to the public — cinephiles might recognize the greatness of Mia Farrow in “Rosemary’s Baby” or Édith Scob in “Eyes Without A Face” (to pluck two random examples from a bottomless pool), but many of the genre’s most iconic performances have become entombed in kitsch, so inextricably woven into the fabric of pop culture that we tend to take them for granted.

To a degree, that tendency is understandable. There’s something so primal and immediate about a good (or merely effective) horror movie that it can be easy to overlook the humanity of the performances that hold them together, easy to forget that fear is the most base emotion that all of us have felt at one point or another, and therefore also the hardest emotion to fake. How else to explain the fact that Essie Davis’ face isn’t printed on Australian money after “The Babadook”?

But in a year that has already seen Kazan in “The Monster,” Mary Elizabeth Winstead in “10 Cloverfield Lane,” Anya Taylor-Joy in “The Witch,” Narges Rashidi in “Under the Shadow,” and Teresa Palmer in “Lights Out,” and is hiding killer indies like “Always Shine” and “The Eyes of My Mother” right around the corner, there’s really no excuse for failing to appreciate that — at a time when film is supposedly dying — it’s the people who pretend to be dying on film who are breathing the medium full of new life.

Which isn’t to say that there haven’t been great male performances in these films (here’s looking at you, John Goodman and John Gallagher, Jr.), but rather to underscore that horror remains the only genre in which women are reliablypositioned at the center of the story. And not just women, but real women.Women with blood on their faces and hurt in their hearts. Women who are tempted to rebel against their family’s oppressively pious ways and dance with the devil in the pale moonlight. Women who just want to help their kids survive the Iran-Iraq War, but are forced to confront the evil spirit that slips into their bed. And, in Kathy’s case, women who have dragged their daughters into an all too literal fight with their demons.

As Taylor-Joy put it in a recent interview, horror allows people “to be beautifully flawed in a way that a lot of other movies are too scared to show,” and that rare freedom is only granted to the genre because it’s uniquely unencumbered from the need to have “likable” characters. And because horror movie heroines don’t have to be likable, many of the most effective horror movies ensure that their heroines are not.

You will not like Kathy — certainly not at first, and possibly not ever. She’s a trainwreck, an unfit mother who seems to have surrendered to her vices. She hits her pre-teen daughter. She screams “Fuck you!” in her face. If not for Kazan’s heartsick helplessness, Kathy might seem irredeemable by the time we even learn her name. But she and Bertino know what they’re doing, know that they have an ace up their sleeves. They know that there’s no way to galvanize audience identification like stranding someone in the stuff of our collective nightmares. We’re in that car with Kathy as she’s driving her daughter in stony silence, and we’re in that car with Kathy when it becomes a chew toy for an oozing monster.

From the moment you start wondering what you might do in that situation, you’re already starting down the road towards a degree of understanding that other films may never be able to inspire. The part of your brain that controls survival empathizes with Kathy in the most primitive way, and forces the part of your brain that controls judgement to catch up. It’s the closest thing the movies get to inspiring unconditional love — the unconditional love that might exist between an alcoholic mother and her frightened little girl, for example — and once you begin hatching plans for Kathy to survive her predicament, it’s only natural that you begin to think of ways in which she might be able to survive herself.

“The Monster” is a simple movie, a refreshingly straightforward genre exercise that’s heavy on practical effects and light on anything that might distract from the thrust of its story. But that simplicity is what makes it such a great lens through which to look at all of the unique things that its genre makes possible for its actresses, and its actresses make possible for their audience.

“The Monster” is now playing on DirectTV. It opens in theaters on November 11.